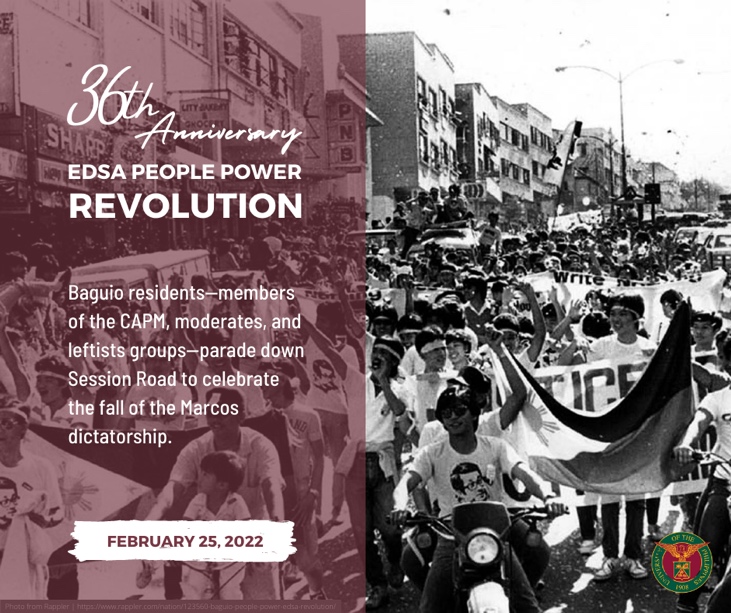 PEOPLE POWER IN THE NORTH. Baguio residents from different political shades and hues march together along Session Road to mark the end of Ferdinand Marcos’s authoritarian rule. #EDSA36

THIRTY SIX YEARS AGO… AND MORE?

Thirty six (36) years ago, Filipinos protested on the streets to fight tyranny and oppression under the Marcos Regime. 36 years ago, the TI Similla Editor Prof. Delfin Tolentino wrote, “We join the rest of the nation in celebrating the victory, but we also put forth the need to understand that our society has not changed in a fundamental sense” (1986).

Prof. Delfin Tolentino wrote this when I was about 10 years old. I was still living in Manila and classes were suspended. I remember my dad telling me, “the people I saw on the streets were wearing yellow, some were in red. I was waiting for both yellow and red to mix… in my mind I wanted both colors to merge to give me that sense of hope that a true struggle for equality will happen soon.” I asked him, “what struggle for equality? I thought that this revolution will be for all.” He shook his head and answered, “I am not sure… I think it will not happen at this time… seeing the politikos in EDSA might validate my prediction.”

Entering the classroom as a first year college student way back in 1992, I read the words written on the upper right side of the blackboard, “RAMOS…DIKTADOR… TUTA.” The words “diktador” and “tuta” were also written in the placards in 1986. The only difference is the name– from Marcos in 1986 to Ramos in 1992. And so the words “diktador,” “tuta,” “tirano,” “mang-aapi,” came alongside with phrases such as “igiit ang karapatan ng mamamayan,” and chanting of “Bayan, bayan, bayan ko, di pa tapos ang laban mo.” For 36 years, the rhetoric is the same– especially the call–that cry, “Bayan, bayan, bayan ko, di pa tapos ang laban mo.” For thirty six years, the cry remained but the names changed: from Marcos, Aquino, Ramos, Erap, Gloria, Noynoy, Duterte. When will this rhetoric and cry change? Thirty six years ago, Prof. Delfin Tolentino wrote in Ti Similla, “Many things remained unchanged; the people’s struggle should proceed.”